Box Scores Showing How Baseball Will Break Your Heart 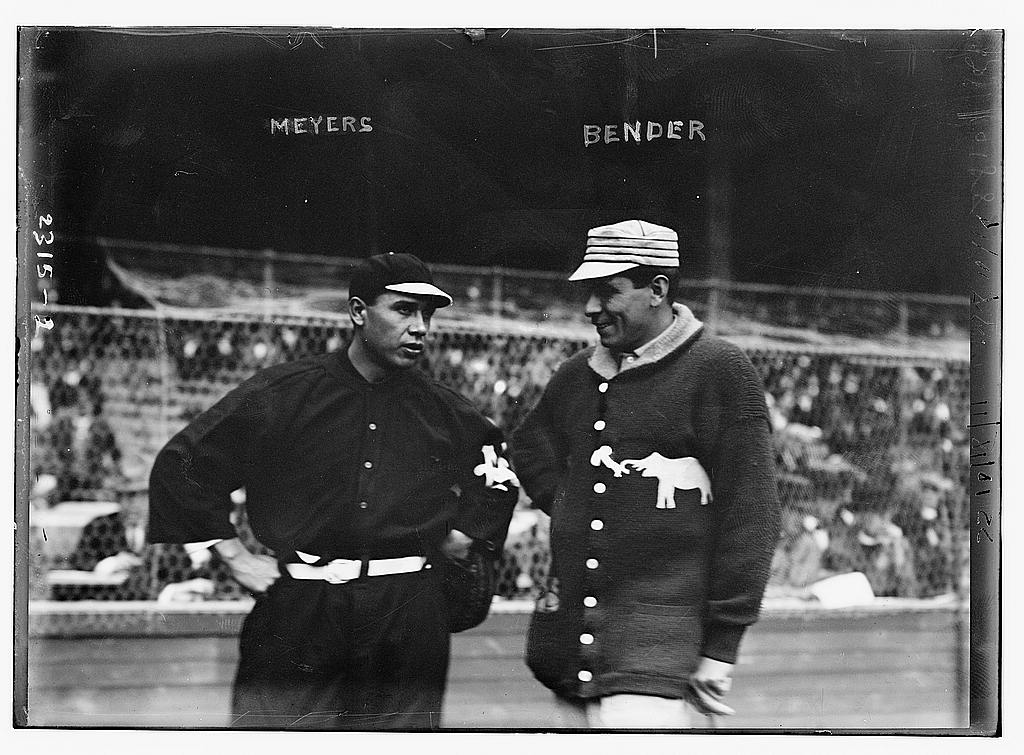 At the 1911 World Series: Jack Meyers, catcher for the New York Giants, and Charles Bender, pitcher for the Philadelphia Athletics. Meyers was of Cahuilla heritage and Bender was a member of the Ojibwe tribe. Library of Congress

Even though the Phillies lost by only one run last night, the game never really felt close. Any runs after Kyle Schwarber’s leadoff homer in Game 5 of the 2022 World Series seemed impossible. Thanks to the Astros’ dominant pitching, still more (more!) defensive mistakes, and sheer bad luck, the Phils were never able to close the gap. When Rhys Hoskins missed a sharp grounder to put the Astros up 3–1 in the top of the 8th, that one additional run felt like ten were just scored.1

While stress-petting my dog and talking nervously with visiting family, I thought about how this is one of the distinguishing features of the sport. In basketball, pace and flow make a swing in momentum likely enough that the prospect of closing a ten-point deficit can feel the same in just about any game. Ten points is always ten points. But in baseball, knowing the score isn’t so clear cut. A game can get locked into a dynamic pretty early on that lends each run a sense of plausibility or inevitability, condemnation or atonement. The numbers in the box score take on a qualitative aspect beyond their count.2

We can break down the most minute data collected by countless stadium cameras to explain this loss, like the number of times Rafael Montero’s fourth consecutive fastball to Alex Bohm spun before it sped past him for a strikeout: 2,487, slightly above league average — so, maybe just a bad AB from a hitter trying to make too much happen. But I, having just suffered through watching the game, can see enough from the box score:

…a box score is more than a capsule archive. It is a precisely etched miniature of the sport itself. […] This encompassing neatness permits the baseball fan, aided by experience and memory, to extract from a box score the same joy, the same hallucinatory reality, that prickles the scalp of a musician when he glances at a page of his score of Don Giovanni and actually hears bassos and sopranos, woodwinds and violins.3

Beyond their count, there’s a structural character to the way a box score’s numbers are laid out. Read left-to-right, you can get the drama of the game: that excruciating procession of line score zeros stretching from the second to seventh innings:

Or, top-to-bottom in the box score, the 3 or 4 times that hitters all along the Phillies lineup were left on base.

This is what makes historical box scores so compelling, and the work of amateur researchers who compile them so important. There, in miniature, is the minute-by-minute drama of contests that happened over a century ago. I’m thinking here of the Seamheads Negro Leagues Database, a project led by Gary Ashwill, who documents some of the research process — a painstaking search through newspaper and microfiche archives — on his blog, Agate Type. This all-volunteer data curation project resulted in Baseball Reference incorporating coverage of the Negro Leagues (1920–1948) into their database, and later, led MLB to incorporate the records of Negro League players alongside those in the National and American Leagues, finally acknowledging that the level of competition and skill of players was equal.

While Seamheads focuses on player statistics, Retrosheet features game box scores and even play-by-play descriptions of countless games from 1871–2021. (Coverage of the Negro League games has been improving.)

With postseason fever spreading through Philly, the 1911 World Series caught my eye among these records. It was a New York / Philadelphia contest, but between two teams who have both long since left those cities: the Giants and Athletics. In the 1910s, the Philadelphia Athletics were in the midst of a dominant run and would go on another a couple decades later. It’s enough to make a Phillies fan red with envy. Despite the fact that the Athletics played in Philly for only 53 years (1901-1954), they had 8 World Series appearances. It took the Phillies 140 seasons (1883-2022) to win the pennant the same number of times.

Two Charles Bender cards printed by the American Tobacco Company in 1911. The verso of the card on the left mentions that Bender “learned base ball at Carlisle,” which suggests that fans would have been familiar with American Indian residential schools designed to assimilate Native Americans into Western culture. Benjamin K. Edwards Collection, Library of Congress

In 1911, Philadelphia was up two games to one (sound familiar?) when the Series came back home to Shibe Park for Game 4. They started future Hall of Famer Charles A. Bender, who had pitched a complete game loss to the Giants in Game 1.

A first glance at the line score suggests that Bender had a rough first inning.

The Giants’ leadoff batter hit a ball right at Bender, maybe knocking him off balance. Bender then allowed a triple and a sac fly before getting the next two batters out. After three games that were won by just a single run, it must have felt like the floodgates had opened for the Giants after a monster top of the first. But, despite the Athletics’ defense behind Bender giving up five errors, he wouldn’t allow another run to score for the rest of the game.

What the box score doesn’t capture is the immense pressure Bender had to endure from racist fans and opposing players. Bender was a member of the Ojibwe tribe. Along with Jack Meyers, catcher for the opposing Giants and a Native American of Cahuilla heritage, both players were given the nickname “Chief.” That unfortunate name is still used in place of their first names in many record books, even on Wikipedia. According to his biographer, Bender would respond to racist taunts from fans and opposing benches during the game by yelling, “Foreigners! Foreigners!”

Just two days later, Bender would pitch a record third complete game to clinch the Series, striking out 5 and allowing only two runs, both unearned. The Giants were crushed, 13–2, giving the Athletics their second consecutive World Series victory. The following month, Bender starred in a comedy film alongside his teammates, The Baseball Bug. ,